How to Reach Us

The University of Saskatchewan Computer Museum was first conceived of in late 2001, over lunch at the Faculty Club. Further meetings came of this, and on February 8th, 2002, the museum was formed, again over a swanky Faculty Club buffet. The original pioneers that attended these meetings were Rick Bunt, Merlin Hansen, Greg Oster, David Schwab, Terry Roebuck, and Robert Grosse.

At our first official meeting, Rob Grosse stood up and said "We need to hold meetings every month to be effective and keep people on track". Rick Bunt replied, "Agreed; since you suggested it, you can chair them." That's how Rob became the first Chair of the Museum. Rob served in that role from 2002 to 2012.

The early years of the museum involved collecting equipment, software, and other artefacts. Then, in March of 2004, the Museum was invited to participate in a technology history display on the main floor of the Murray Library. This Display was developed by a student in the College of Engineering; the Museum added to it from our collection: an early IBM XT 5150 microcomputer, and an early IBM ThinkPad laptop. This was the Museum's public debut as an organization, and the display was available for viewing until September, 2004. 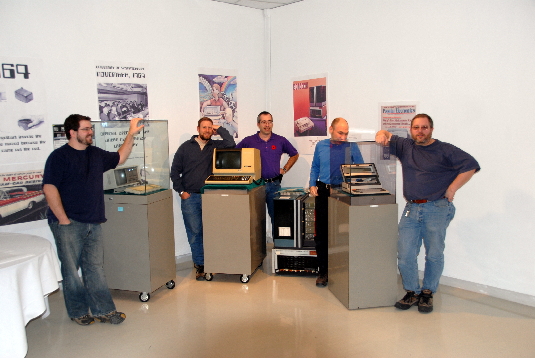 In August, 2005, a decision was made to pursue a physical home for the museum's growing collection. Museum financials had to be setup to accomodate a lease agreement, and in the process the museum became a formal and recognized University organization. As of March 2006, the Museum had secured both a storage facility and several public facing display cases around campus.

Since 2006 we have spent time on several initiatives: